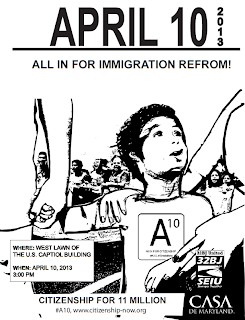 A friend shared this "text" with me on Facebook, and I thought I would take a stab at some critical  discourse analysis.  I'm not really sure how to begin, or if I'm on the right track.  Your thoughts and feedback are welcomed and appreciated!  For the sake of transparency, I am pro-immigration/ pro-citizenship.

On the surface, this text is part of a mass media campaign for an April 10th march for immigration reform in Washington, D.C.  The purpose is social change, social justice.  I see a family and the English words "all in for immigration reform."  The march seems to be a wholesome, worthy cause.  The text initially appears to be a grassroots, community level effort, rather than a top down, government sponsored campaign.  I wondered about the date, April 10th, and whether there was some significance to it.  Other than being the 100th day of the year,  I could not make a connection.

The black and white drawing seems race-neutral, although I immediately thought it to be a Latino family. I think there is  a stereotype that immigration is about Latinos.  I need to remind myself that not all immigrants are from Latin America.

Then again, we heard so much about the "Latino vote" after the last election.  What stakeholders are pursuing the Latino vote?   I visited the website listed on the text and found a long list of sponsors, including  Casa de Maryland, and labor unions 32BJ and SEIU.  32BJ is a local affiliate of SEIU, a union with, according to its website,  2.1 million members.  Wow, that's a stakeholder with a lot to gain from the resulting legalized workforce of "11 million for citizenship." What other stakeholders are involved in the A10 event?

I read this paragraph on the Casa de Maryland website:

On April 10th, we will make our voices heard loud and clear that we expect Congress to fix our broken immigration system in 2013. We will educate, march, rally, pray and knock on the doors of Congress until President Obama signs commonsense immigration reform that includes a realistic path to citizenship.


Does the "commonsense" referred to in this paragraph imply that immigration reform is an issue involving all Americans?  For it or against it, each one of us is affected?   Going back to our class discussion, and use of the words common sense in discourse analysis,  I'm not sure who is excluded.  Who is not part of the immigration discussion?  Then again, I guess the purpose of a mass literacy campaign is to get everyone involved, one way or another.

The web site asks people to register for the event by providing name, address, and email.  I wonder what kind of marketing and solicitation organizations that data will be sold to.

This is my final opinion:  I think there are big stakeholders on both sides of the issue who have a lot to gain from a huge turnout on April 10. SEIU has a lot to gain.  It's not that I think labor unions are bad.  I think the local 32BJ would have "Maria's" best interests at heart, but, with 2.1 million members, I think SEIU's stakehold is much larger than the individual's welfare.  Both Republicans and Democrats have a lot to gain;  the Latino vote changed the course of the 2012 election.  Each party wants to win votes and blame the other for not fixing immigration.

Everyone seems to be courting the Latino vote.  When I look back at the text, I'm not sure anyone  has that family's best interest in mind.  I think this immigrant population is being exploited by both sides of the reform issue.  I think there are stakeholders who benefit from the status quo: a good controversy makes good publicity for groups pro and con.   I also wonder who is looking out for the non-Latino folks.   Maybe Asian and African immigrant populations aren't large enough to warrant a mass literacy campaign by labor unions and politicians.  Maybe I have it all wrong.  I hope I do.  I want the A10 march to help that family.

Thanks and let me know how you read it!  Susan