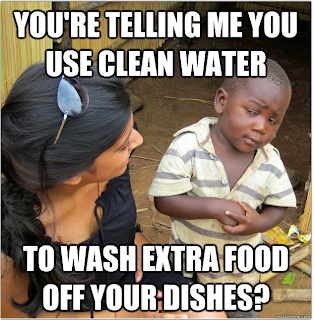 I saw this picture on Facebook and it stays with me. It is funny at the first glance. But the picture and the words are conveying much more than it appears to be when analyzed with the topics we have discussed in our class.

The first thing comes to me after I read the lines is that how the context and specific word choice change the meaning and the tone of a sentence. If the sentence is "we use water to wash food off my dishes", it sounds perfectly normal to me and to most people like me. It is what we do everyday in our life. It is what we were taught to do when we where young. And this is what we teach the next generation to do. However, when put in the context, where both water and food are scare, and use "clean" and "extra" to modify "water" and "food", it becomes such an strange behavior. The skepticism of the little child shows that how the context decides people's common sense and how the common sense influences the meaning of literacy. The target audiences of the picture share the common sense that we wash extra food off plates with clean water. But the child in the picture don't. He doubts it because it violates his common sense. Therefore, when talking about this topic, he cannot participate in the conversation without deliberately identifying and confirming his grasp of the "common sense" that there is more than enough clean water to drink and extra food to wash off.

When I shared this in last class, Susan Watson brought up a point that led me to a deeper analysis of the picture and my ideas about it. She asked that what our assumption was when we read the words and got the punch line. Did we read it with our single story of the poverty-sticken Africa? Her question opened up my mind because it was right on target. I ask myself why I get the humor here. Will it be equally interesting if it is a white boy asking the same question? No. I wont's get the humor then because I assume that a white boy should have got used to things like this and there is no reason for him to be skeptical about it. When it comes to a black boy, the situation is different because I automatically assume that he does not share the common sense with "us". I look at the picture again and focus more on the image of the child. Honestly, he is not as skinny as the starving Africa kids on TV. Maybe he also lives in city and have access to clean water and sufficient food just like we do. However, since my pre-assumption of the poorness in Africa is so deep and powerful, I censored the other possibilities in my mind and came of my conclusion directly.

In this case, I think the assumptions indicate not only sociocultural factors in literacy, but also the power around it. As an audience, I feel pity for the child's living condition and want to help to change it. On the one hand, my idea is well-intended and show my good will towards him. On the other hand, based on the critical theories, I am  presenting myself with some privilege and putting my power above him. Unconsciously, I put myself on the position to decide what he need and what his life should be like without asking what he really wants. This is not just what I do when I see this picture, but also many countries do when trying to help Africa fit in the temporary world. They are using their power to change Africa into the way they want it to be, regardless of how African people want to present themselves.

Another thing that relates to power relationship is the phrase "Third world" in the name of the picture. It is an amazingly powerful phrase that separates the woman in the picture and the audience of the picture from the "poor" boy and his fellows. It is "othering". The hidden message is that we are different from those needy people in Africa. They are desperate for our help and we need to save them. However, the truth is that we are not that different. To be more explicit, I am from the so-called "biggest Third World country". I understand that how situations are much more complicated than what people may believe about the "Third World". But this phrase has been used for so many years to "other" people. In western countries, it has been used to convince people that they are living in a better world, while in others, such as China, it is used to advocate the evilness of the wealthier country. It is fascinating that how those labels are created with artificial meanings by power.

Some of the ideas were generated while I wrote them, so that I am not quite sure if they make sense to you ( I sincerely apologize if they don't). Maybe I am over-thinking about a funny picture. But it is so interesting to read a text as if I am peeling an onion. There are layers under layers to analyze, which makes a simple text so juicy and rich.
Posted by Unknown at 5:16 PM