Paulo Freire and I are "old friends."  As an undergraduate student of Hispanic Cultural Studies, his theories  pervaded many of the courses that I took in my department.  To be perfectly honest, I was impressed by his idealism and his passion for social justice, but skeptical as to how some of his ideas would work in real life.  Though we studied the life and philosophies of Freire as a cultural theorist fighting for social justice, I never really got to know Freire as an educator and actually examine some of his theories in practice.  However, as I read the articles assigned for this week, I was really able to understand the connection between his ideas and methodologies.  Eager to get reacquainted with Freire, I found my copy of  Pedagogy of Freedom and began to look at some of my favorite passages that I had highlighted during my classes.

1- "What is my neutrality, if not a comfortable and perhaps hypocritical way of avoiding any choice or even hiding my fear of denouncing injustice.  To wash my hands in the face of oppression."

Freire believed that education was not neutral, and that the interactions between teachers and students were shaped by outside forces.  I feel that issues of social inequality and injustice are often ignored in educational systems because they do not seem to be relevant to the standard curriculum.  The contents of the standard curriculum are often so far removed from the students' lived reality that they are unable to understand it or find any relevance in it.  Poverty, oppression, and injustice played a tremendous role in the lives of the Brazilian slum dwellers in Freire's literacy program.  These social forces kept the students from participating in the dominant discourse, and in doing so, made them feel disconnected and powerless. This marginalized them and  inhibited them from truly learning.

2- "This is why I say that whoever feels that he/she has something to say ought to accept, as a duty, the need to motivate and challenge the listeners to speak and reply.  It is intolerable to see teachers giving themselves the right to behave as if they owned the truth..."

Freire taught the importance of listening and dialogue between the teachers and students as co-learners. As the students began to depersonalize their problems and see them within a larger social context, they were lead to take action against social injustice and fight to regain their voice within the dominant discourse.

And lastly, I will leave you with some inspiring words from Freire...

"I am a teacher full of the spirit of hope, in spite of all the signs to the contrary.  I am a teacher who refuses the disillusionment that consumes and immobilizes.  I am a teacher proud of the beauty of my teaching practice, a fragile beauty that may disappear if I do not care for the struggle and knowledge that I ought to teach."

Freire worked with a population that was plagued by fatalism and disillusionment, but he never gave up trying to change the world around him. 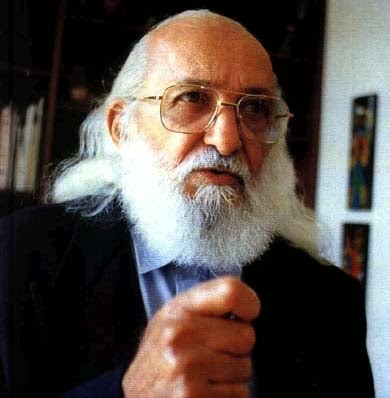 Posted by Rachel Wiltshire at 8:14 PM